Go Ahead, Make My Day–Any Which Way You Can

Clint Easwood’s remarks on the last night of the Republican National Convention in Tampa, Florida involved  unscripted remarks as the actor spoke to an empty chair while addressing President Barack Obama.

Quite a metaphor.  Winning?


As one relaxes and recharges one’s sunny perspective at the beach, it was nice to encounter a “littoral” ultimate truth.

Will Rogers on Politics

Barky at the Moon? 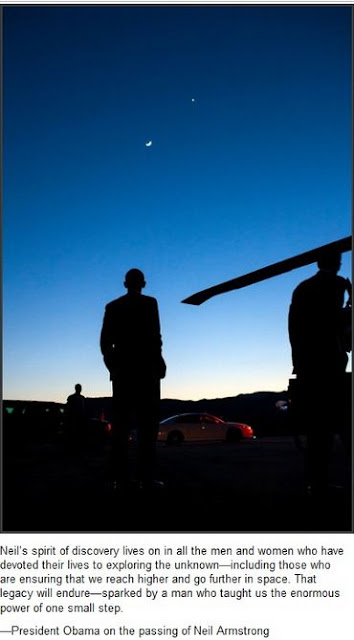 It is interesting that President Barack Obama’s tribute to Neil Armstrong, the first man to walk on the moon, featured himself prominently gazing towards the moon.
It is an odd tribute to a great American who has passed away to use as a vehicle for the President to publicize himself rather than the honoree.
There is a tremendous irony that one of the few issues where Neil Armstrong left his sphere of privacy was to protest the cuts that the Obama Administration

It was interesting that our Sun “King” was gazing at a crescent moon. Hermanutically significant or just coincidence?

It used to be an honored American tradition that Presidential candidates ceded the lime-lights during the week of his opponent’s political convention, spending only a truth squad of tier b surrogates to counter charges in the news.

Like so many other things, the Obama 2012 campaign has broken this civil tradition by tapping our national treasure Vice President Joe Biden to campaign in Tampa and vicinity at the start of the Republican National Convention.  Between dodging the rain from Hurricane Isaac, Secret Service Security for the Vice President and Mr. Biden’s incorrigible incompetence, this should be a hot mess in Tampa.

As Mr. Biden was chosen to lead the Truth Squad for the Democrats, it seems only right to share a blazing light of truth on Biden’s  bloviatations. As you watch, please remember that the 69 year old Mr. Biden is the next in line for the Presidency of the United States  and that Mr. Obama chose Biden in case Mr. Obama be unable to perform his elected duties.

God Save the United States of America.